After a first Razr then a Razr 5G, the new Motorola Razr 2022 folding smartphone is finally marketed in France. It is a clamshell mobile that wants to compete with the Samsung Galaxy Z Flip4 by using the same principle of a horizontal hinge to open vertically deploying a very large flexible AMOLED screen of 6.7 inches diagonally at 144 Hz , but also taking advantage of a large enough screen on the outside to carry out some operations without having to open the mobile. Equipped with a Qualcomm Snapdragon 8+ Gen 1 processor with 8 GB of RAM, it must offer all the power necessary (and even more) for everyday applications that can also indulge in the most demanding games. We tried it quickly and here are our first impressions before a full test.

The new Motorola Razr 2022 smartphone represents what the manufacturer knows how to do best in terms of innovation with this folding model. It has an extremely compact shape when the mobile is folded and manages to offer as large a display surface (or more) than any other smartphone when fully open. It is currently available for a price of 1199 € offering an internal storage capacity of 256 GB, without the possibility of inserting a memory card.

The Razr 2022 therefore takes up the principle of these predecessors in a compact format folded and as large as another mobile once it is opened. The smartphone is quite large in hand. Indeed, it is 79.79 mm wide while the Samsung Galaxy Z Flip4 mobile measures 71.9 mm. 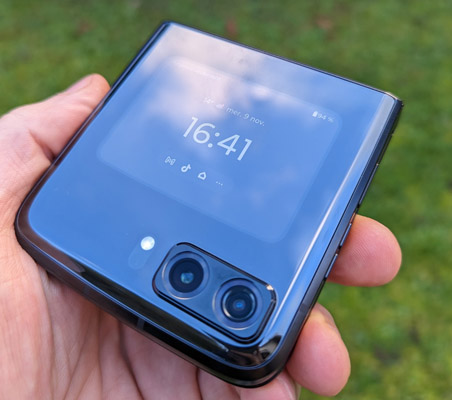 Open, it has a profile of only 7.62 mm thick against 6.9 mm for the Galaxy Z Flip4, therefore thinner. Its weight is 200 gramswhich remains reasonable and exactly in the average of mobiles, but the Samsung folding clamshell is a little lighter at 187 grams. 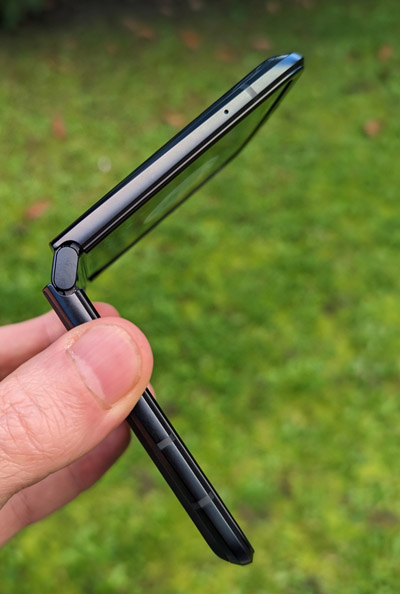 Overall, in hand, we appreciate this width. Indeed, it allows to have outside a screen which is in 16/9 format and which allows to take advantage of a fairly large display surface. On this subject, the screen measures 2.7 inches diagonally against 1.9 inches for that of the Samsung Galaxy Z Flip4. the Motorola Razr 2022 is offered in black, uniquely. On the front, the idea is to blend the screen into the rest of the chassis hence the use of a glossy coating which is extremely prone to fingerprints, which is not the case with the another part (on the back if you want when the mobile is closed) which has a different coating, extremely smooth and pleasant to the touch, but which leaves absolutely no fingerprints. 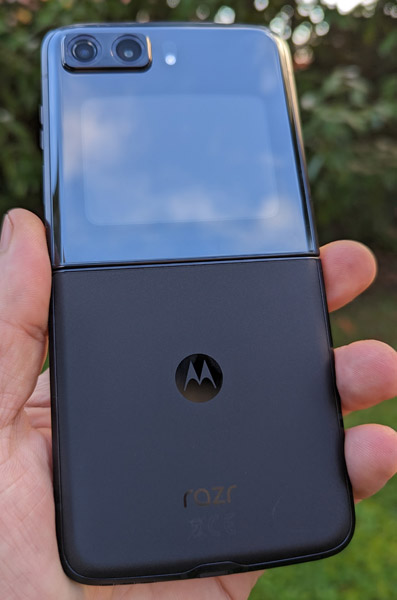 Always at the front, in the lower part, there are the two photo sensors that protrude slightly from the rest of the surface (about 1 mm) and the flash is located right next to it. The edges of the mobile are beveled not only outwards, but also inwards. This shape makes it possible to take the side of the mobile well to open it, which may not sometimes be obvious with the Samsung. It’s difficult to open the Razr 2022 with one hand. Typically, both will be used; one to hold the mobile and the other to deploy the front panel. 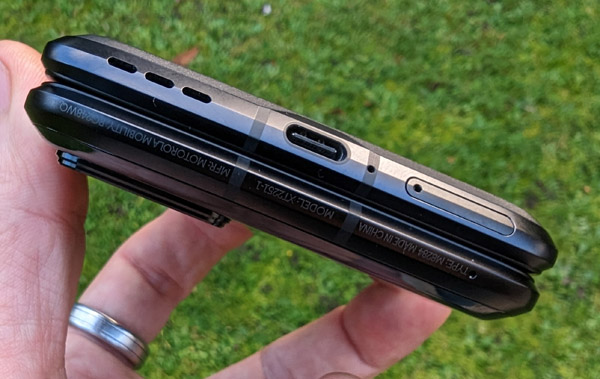 The hinge of Motorola Razr 2022 is quite small. It allows you to fold the mobile at different angles that it keeps. The device is well balanced and does not tilt backwards even at a very open angle, greater than 110 degrees. Automatically, the display adapts, depending on the application in use. For example, to take a selfie, you can install it at 90 degrees to have the framing window facing you and the control buttons on the lower part. The hinge is quite firmbut not too much either, still offering a certain flexibility. However, it shows a little play, at least on our test model. However, you can press the top part without it bouncing. Once fully opened, and even on a white background, the crease in the center (horizontal direction) is not visible at all. It’s a great feat compared to the previous generation and the Galaxy Z Flip4 which has a hard time hiding its own. Here, whether facing or slanting, the fold is not visible. This is true almost up to 90 degrees to the side. Cheer. On the horizontal axis, on the other hand, we begin to see the fold if we tilt the mobile, after a certain angle despite everything. Overall and in use, we quickly forget that there is a crease in the center of the screen even if we must all the same admit that we feel it very slightly when passing the finger. 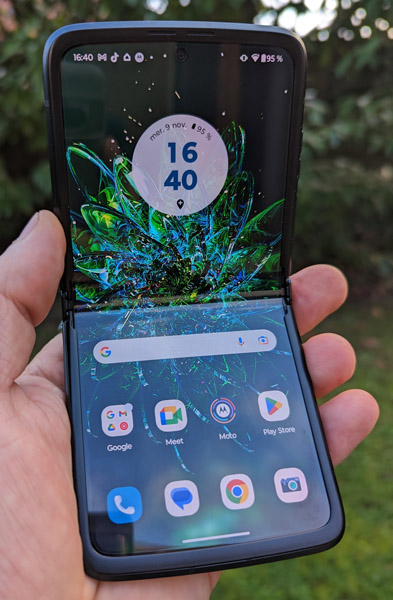 When the Razr 2022 is closed, folded, the ends touch, but at the hinge, like on the Samsung, there is a slight gap between the two flaps. This gap is a little less pronounced than on the Galaxy Z Flip4 but present despite everything, the contours of the two flaps being glued. As a result, the mobile is not certified protected against dust, like the Samsung and when left in your pocket for a while, fibers and other dust settles in the interstice left between the two shutters, at the level of the hinge.

The front panel touch screen is unlocked using the fingerprint reader that is installed on the device profile (the top pane). We can then use the widgets available on the outdoor display surface by dragging the different panels whose order and content can also be customized. It is quite practical and ergonomic. We also have access, still from this screen, to shortcuts for certain functions to activate or deactivate options, but also, for example, to set up an alarm or start a stopwatch. You have to see the use, but this screen seems quite ergonomic and practical to use it regularly and limit the openings of the device. 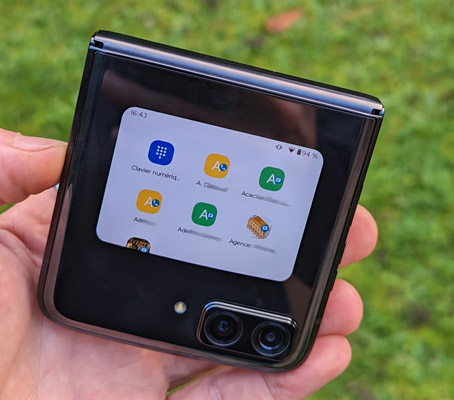 Note in passing that the two buttons to manage the volume are positioned just above the standby button (and therefore below when it is closed) and that they are quite small. 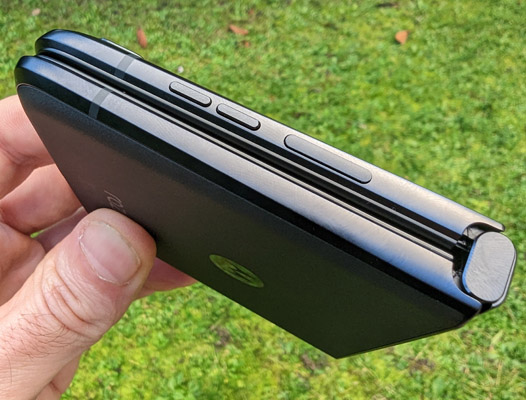 The internal screen, a technological feat

Open, the mobile presents a large screen of 6.7 inches diagonal which is not too narrow thanks to a certain width which allows it to offer generous proportions, as much of a mobile that does not bend. It is in 20/9 format. It is very pleasant. What is a little less are the edges present all around the screen. They are a little disturbing at first, but, finally, in use, we ignore them and we no longer notice them both visually and to the touch. There’s a punch-hole at the very top, center housing the 32-megapixel sensor (10-megapixel on the Samsung Galaxy Z Flip4). The display quality seems very satisfactory on the Razr 2022 with a brightness that is sufficient even in the middle of the afternoon in the sun. We appreciate the compatibility with the HDR10+ format used on certain streaming platforms to manage brightness and blacks with HDR sequences. Responsiveness is also there. The flexible AMOLED panel is actually able to climb up to a 120 Hz frequency for apps and even up to 144 Hz in Game mode for those who are compatible. It’s a great feat when you know that the Galaxy Z Flip4 screen can reach a maximum of 120 Hz. Players will appreciate as much as they benefit from an impressive computing power thanks to the integration of the Qualcomm Snapdragon 8+ Gen 1 processor, the most powerful in writing these lines for Android mobiles. During our quick start, it even happened that menus were displayed even before we pressed the screen… This is to say that the performance seems to be there. We will confirm this in our full test.

The beautiful photo configuration of the Razr 2022

Finally, a quick word on the photo sensors of the Razr 2022 which is not half-measures embedding a 50 megapixel optically stabilized main lens to limit camera shake with a 13 megapixel sensor for shots in ultra wide-angle mode but which also manages photos in macro mode, that is to say very close to the subject. These sensors can be used to take photos in the classic way, but also for selfies which allows to obtain a higher quality compared to the 32 megapixels installed at the punch of the screen. Video calls can also benefit. 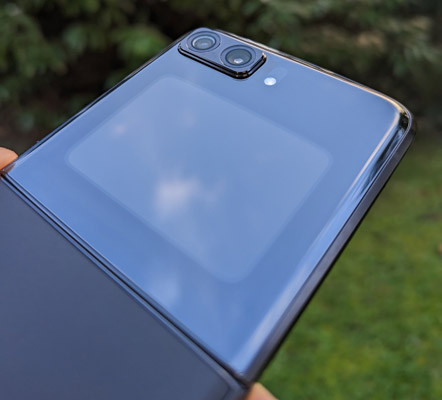 We need to spend a little more time with the mobile to appreciate the quality of the photos it is capable of producing, but the first tests went very well, which bodes well. For us, the Motorola Razr 2022 is a success from the first days we were able to spend with it while waiting for a full test to confirm all this, highlight its strengths, but also point out its weaknesses in order to give you as objective an opinion as possible.