Bandai Namco took advantage of the Game Awards to address Western gamers: Blue Protocol will be well distributed in the West and in a localized version (especially in French), on Amazon Games servers and in free-to-play.

After being very discreet for almost two years, Blue Protocol emerged from the shadows recently during a livestream in Japanese finally announcing the resumption of tests next January. What if livestream from bandai namco was intended for Japanese players, the developer also announced, in English, the presence of Blue Protocol within the framework of the Game Awards. We then imagined some announcements for Western players and they are confirmed: Blue Protocol will indeed be exploited in the West and the online game will be distributed there by Amazon Games (the developer of New World and the western operator of Lost Ark).

Everyone will judge the relevance of the choice. We will nevertheless remember the concretization of the launch of Blue Protocol in the West (until now, the developer was content with promises) and that Bandai Namco has chosen a strong partner. We will also remember that the services of Amazon Games are sometimes a bit random (between the malfunctions of New World and the disconnections encountered by the players of Lost Ark). 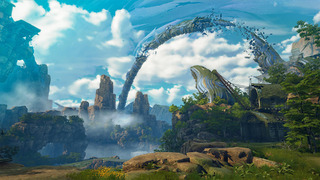 Still, Blue Protocol is taking the opportunity to launch its western official website translated into several languages, including French. The game also takes the opportunity to sketch some of its originalities and in particular a gameplay giving pride of place to multiplayer. Players will certainly be able to evolve in solobut the developer encourages forming groups: solo players collaborating with other players will increase their rewards, the game incorporates group game mechanics (based on the synergy of the five complementary playable classes that will be available at release, the solid Avenger, the offensive Ambidextrous, the occult Archer, the versatile Weavermagician or the Crusher which inflicts heavy damage) and a system of matchmaking aims to help players find comrades in arms. Group play must in particular find expression in the context of boss raids against colossal opponents or in the exploration of an open world.

As a reminder, Blue Protocol is announced for the second half of next year, localized in several languages ​​including French (in addition to English, German, Spanish and Brazilian Portuguese) and will be distributed free- to play. The game is announced on PC, but also playstation5 and Xbox Series.