Assassin’s Creed Mirage is the next installment in the saga from Ubisoft. Thought as a return to basics, it should delight fans. Release date, historical context, history, we take stock of this highly anticipated video game.

The Assassin’s Creed franchise has been around for fifteen years now and it has come a long way since the first installment. Assassin’s Creed Mirage, the next installment in the series, promises a return to basics which should delight fans. As per usual, the game will have fun with History and will offer us to discover a very specific period. This time, we will walk the streets of Baghdad during the golden age of Islam.

In this file, we will take stock of what we know about Assassin’s Creed Mirage. When will it come out? On which platforms? In what historical context will it take place? What exactly does this back to basics mean? We’ll dissect all of that below.

When will Assassin’s Creed Mirage be released?

Assassin’s Creed Mirage will be released in 2023. The Ubisoft studio did not give a precise date, but we can hope for marketing in the first six months of the year. Indeed, Assassin’s Creed games are generally unveiled a few months before their release. 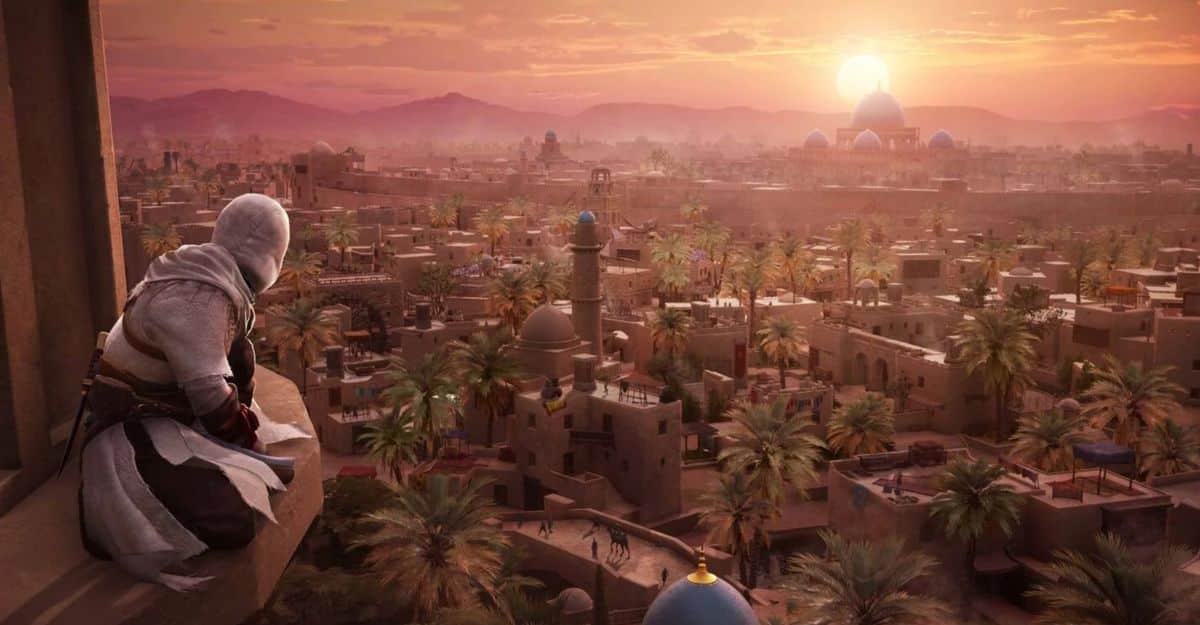 What platforms will Assassin’s Creed Mirage be released on?

Assassin’s Creed Mirage will be released on PC and consoles. It will be available on PS4, PS5but also on Xbox One and Xbox Series X/S. There is no Switch version planned. 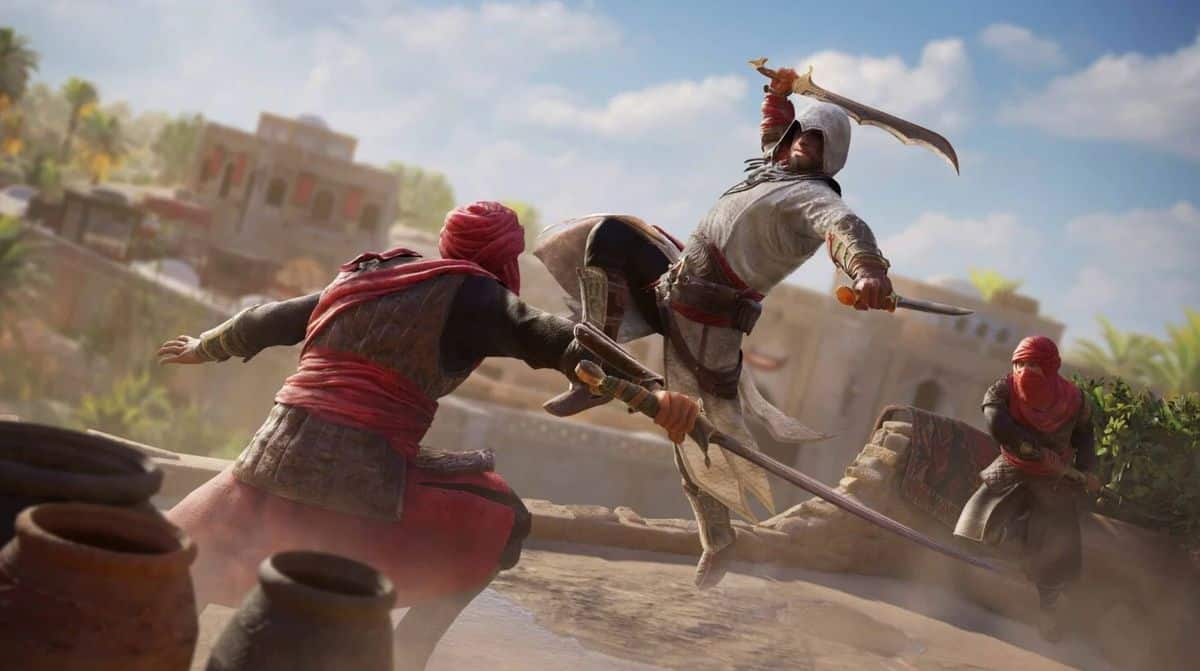 How much will Assassin’s Creed Mirage cost?

Assassin’s Creed Mirage will be surprisingly cheap for a new blockbuster. On the official Ubisoft website, it is displayed at 49.99 euros in its standard edition, and whatever the platform. By pre-ordering it, you will have access to the additional quest of the 40 thieves. A Deluxe Edition is displayed at 59.99 euros. It includes additional in-game items, such as costumes. 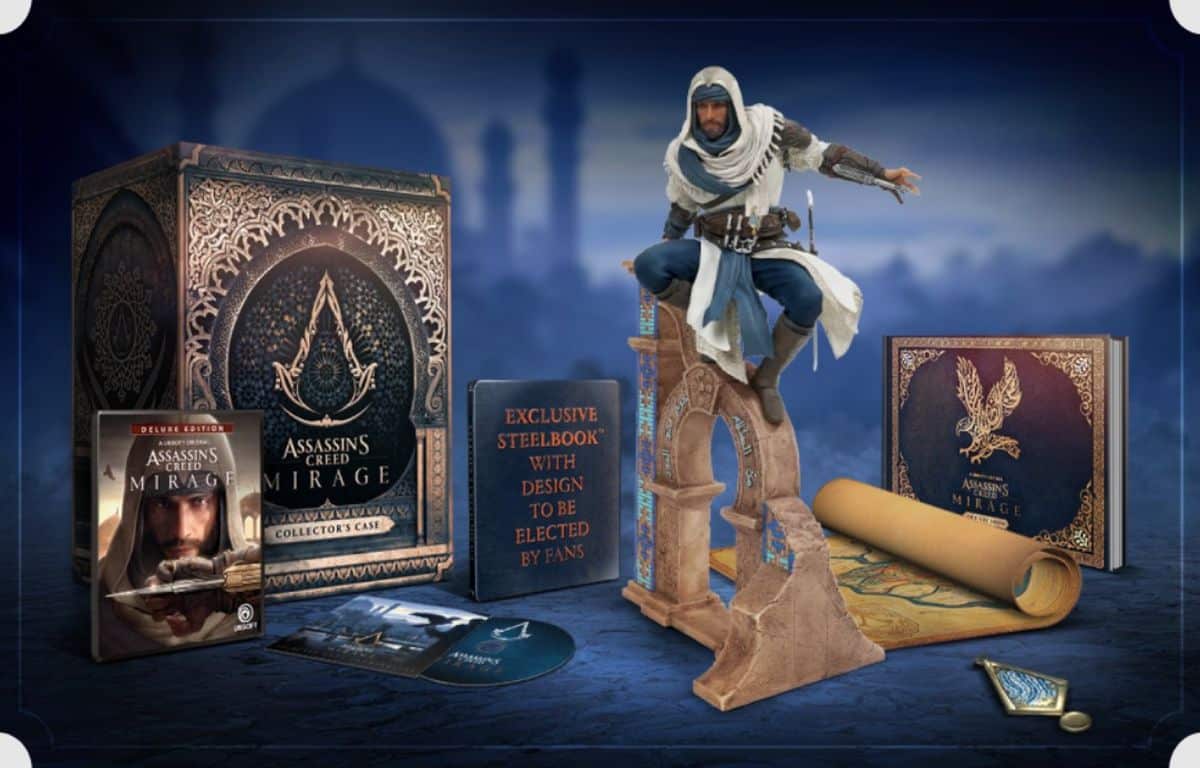 Finally, Ubisoft offers a Collector’s box at 149 euros. This physical-only pack includes the game and the bonuses, as well as various goodies such as a map of Baghdad, the soundtrack, the brooch of the hero Basim as well as a statuette of the latter. To be reserved for fans.

In what historical context does Assassin’s Creed Mirage take place?

Assassin’s Creed Mirage takes place in the 9th century in Baghdad, a few years before Assassin’s Creed Valhalla (which started in 873). At that time, Baghdad was the largest city in the Abbasid Caliphate, if not the largest city in the world. The caliphate is an immense empire which extends from the Maghreb to the gates of India and which will last until the 13th century. 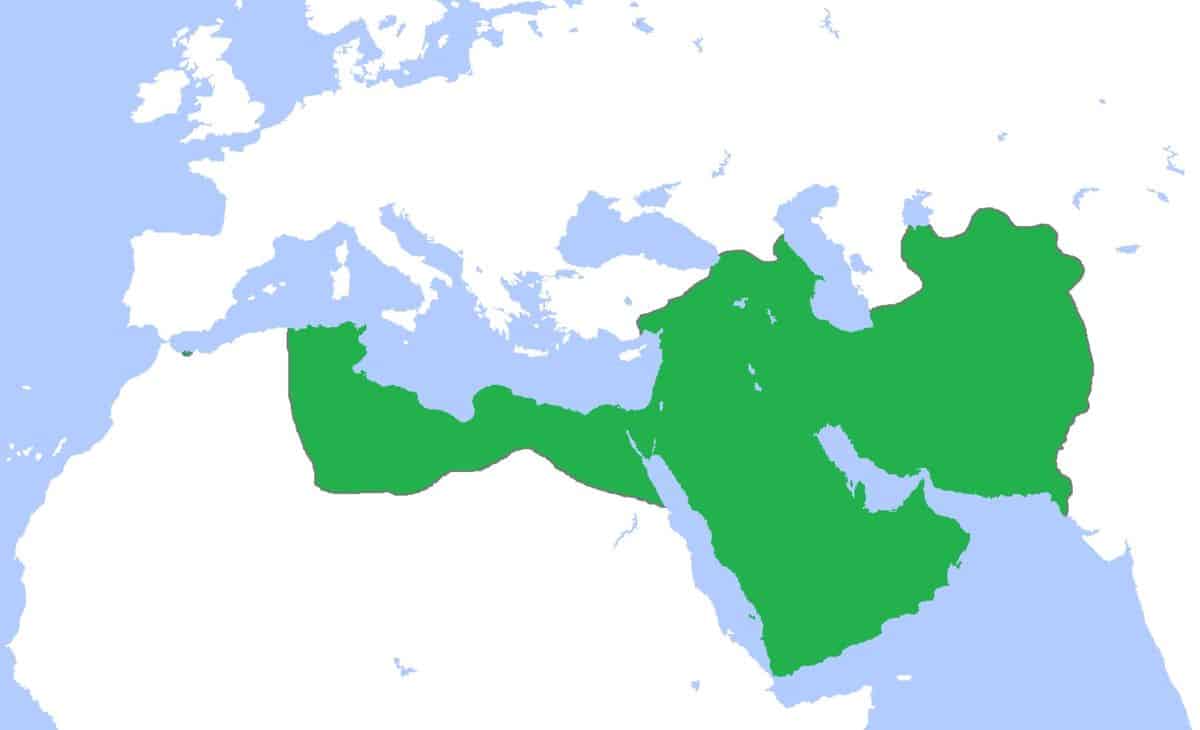 Baghdad is a cultural, religious and scientific center whose aura shines even beyond the borders of the Muslim world. It is also a megalopolis which is not spared by insecurity. The violence in the slums is likely to be exploited by Ubisoft, as Basim (the player) begins his adventure as a street thief.

Baghdad was founded ex nihilo in 762 by Caliph Abou-Djaafar Al Mansur on the banks of the Tigris. Its status as a “new city” allows it to have a particular shape. It is actually a vast circular fort more than two kilometers in diameter. In the center we find the palaces, the universities and the mosques, while the dwellings cluster around them. An ideal layout for an open world video game!

Mirage will set the stage for an interesting period. In the 860s, the mamluks (or ghulams), soldiers of Turkish origin who served as close guards to the caliph, imposed their law in the capital Samarra (located a little north of Baghdad). There follows a period of instability which will last a decade and at the end of which Badgad will once again become the capital of the Empire. We will certainly be able to witness these eddies through the eyes of Basim.

We also know that Mirage will take us in the fortress of Alamut, located for its part in present-day Iran. This citadel, reminiscent of the Masyaf of the first opus, could become our headquarters.

Finally, interesting detail. In the game’s trailer, we see a character dropping an ancient mask, reminiscent of that of King Sargon of Akkad (3rd millennium BC). This suggests that the region’s rich history could be used in the game. One thinks for example of the collection of artefacts or the exploration of Mesopotamian ruins.

What will be the story of Assassin’s Creed Mirage?

As of now, details on the plot itself are slim. We embody Basim Ibn Ishaq, character seen in Assassin’s Creed Valhalla. In the latter, he is an accomplished assassin, but devoured by the spirit of the god Loki. We won’t say more, but he is a central character in the story.

Mirage tells the story of Basim’s youth. While he is only a street thief, he is recruited by the guild of assassins. Little by little, he climbed the ladder until he became the character we know. However, all is not rosy for our hero. He is indeed plagued by nightmarish visions…

What does this “back to basics” mean for Assassin’s Creed Mirage?

Ubisoft boasts that Assassin’s Creed Mirage signs a return to the sources for the saga. But what does that really mean? In the mood, already. Mirage is the first Assassin’s Creed to return to the Middle East since the founding episode of 2007, which happened during the Crusades. Even if the new opus takes place well before, the context echoes it.

Next, Mirage is a return to basics in terms of gameplay. With Origins in 2017, the saga took a radical turn by offering a huge world to explore, endless side quests and a fairly advanced RPG aspect. 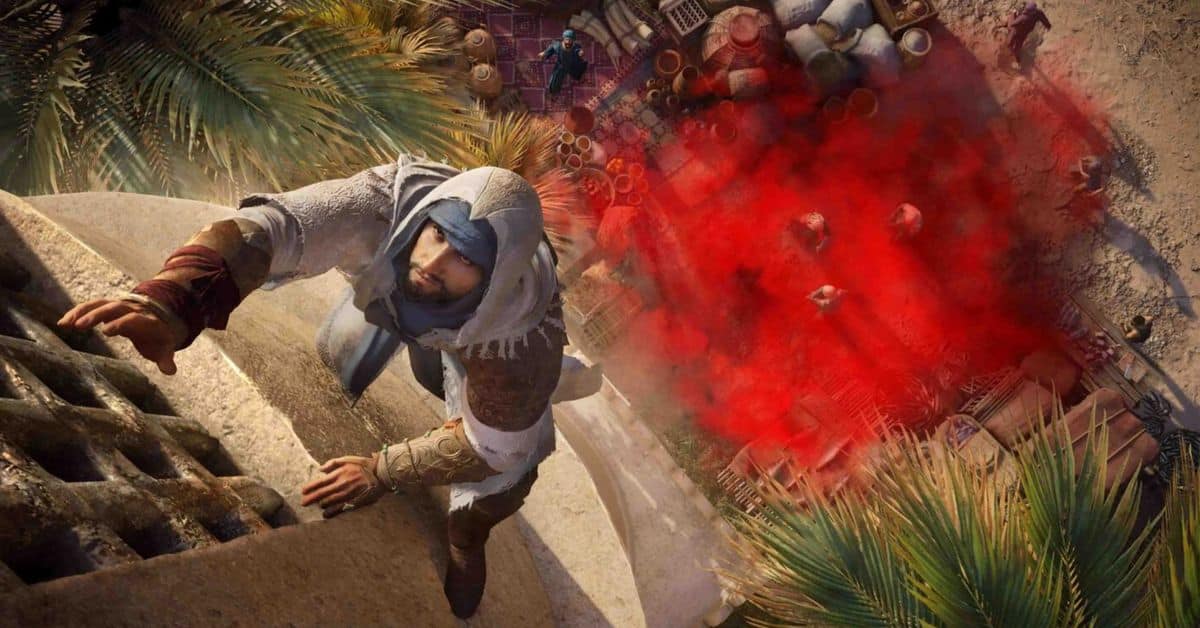 Mirage will go back to basics with one dense city to explore. The focus will be on verticality, obviously with the return of parkour, something that had been put aside in previous games. The RPG aspect will disappear. The player will be able to improve his weapons as in the old games, but not gain experience. As a result, the city will be fully explorable from the start of the game: no more areas locked by levels! Additional detail: we will have a predefined hero. It will not be possible to choose their gender or their appearance. It’s Basim, period. Finally, stealth assassinations will again have to be at the center of the gameplay. 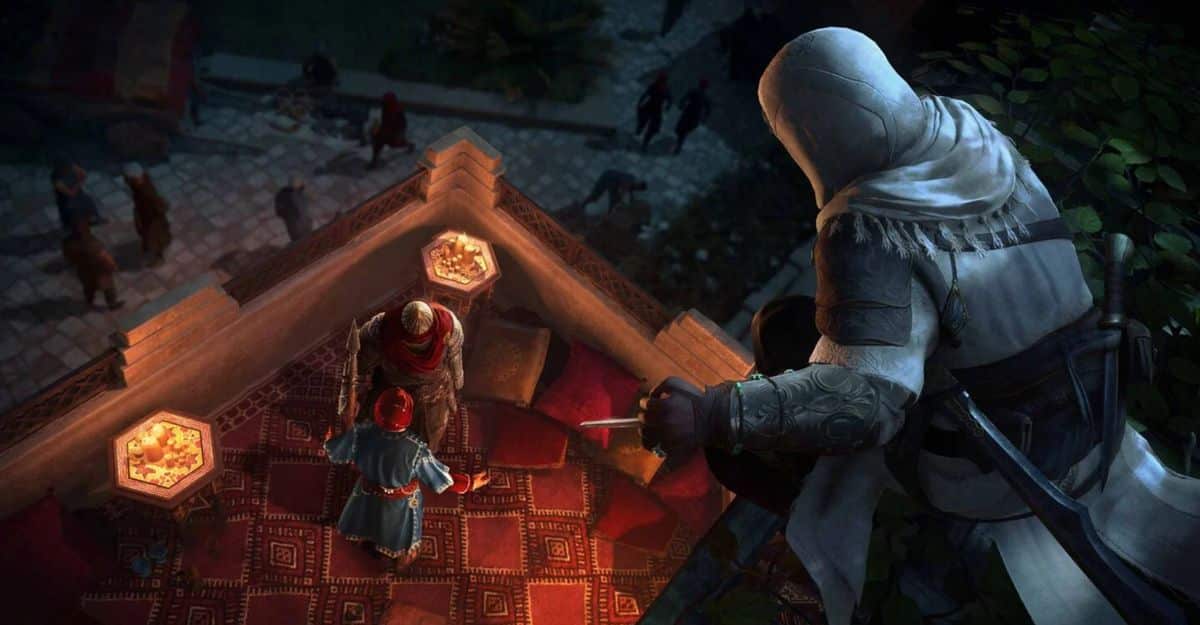 What other Assassin’s Creed games are planned after Mirage?

Assassin’s Creed Mirage is not the only game in the saga planned by Ubisoft. Indeed, three other titles have been announced: Red, Jade and Hexe. These are code names, not definitive titles.

Assassin’s Creed Red will be a “classic” game in the series. It is developed by the same team as Odyssey. It will take place in feudal Japan, a time long requested by fans, and will be an open-world RPG. It will therefore resume the Origins / Odyssey / Valhalla formula.

Assassin’s Creed Jade will it be a mobile game. It will be a real “blockbuster” on smartphones, a bit like what Blizzard did with Diablo Immortal. Jade will take place in the third century in China, during the period of the three kingdoms. It will be free-to-play.

Finally, Assassin’s Creed Hexe is the latest title planned. Ubisoft hasn’t said anything, but gossip assures that it would take place in the Renaissance in the Holy Roman Empire and that it would have a witch hunt as its theme.