More than a year and four months after the release of Resident Evil Village, its first and only DLC, entitled Winters’ Expansion, is finally ready to reach out to us this Friday, October 28, 2022. Included in the Gold Edition of the game or available for purchase at €19.99 on the Xbox store, this expansion brings the third person view for the main story of Village, content for Mercenaries mode and a new narrative episode, Shadows of Rose, supposed to conclude the cycle of the Winters family in the saga. We had the privilege of being able to test this extension over the last few days and to be able to share our feelings with you, controller in hand. Let’s go!

Life in Rose is not so happy

We were eagerly awaiting the consequences of the adventures of the Winters family. It was therefore with great excitement that we immediately embarked on Les ombres de Rose. This extension of the narrative arc told in RE 7 then Village places us this time at the controls of Rosemary, the daughter of Ethan and Mia Winters.

Sixteen years after the events told in Resident Evil Village, Rose is a teenager like no other. Endowed with powers from Megamycete, a bacterial super-organism capable of assimilating the genetic codes and consciousness of living beings, the young woman remains under close surveillance led by the legendary Chris Redfield. Rejected throughout her childhood by her comrades, Rose bears less and less the consequences of her extraordinary heritage. When offered a way to get rid of it permanently, she fully seizes this opportunity. To do this, she will have to enter into “communication” with a sample of the Megamycete. Something to revisit in a completely different context certain emblematic places that we have visited with pleasure and dread in Village.

We will not go further in the disclosure of the scenario, it would spoil the discovery. But yes, The shadow of Rose really and coherently concludes in our opinion the narrative arc of the Winters. Admittedly, the consistency and lore of Resident Evil are sometimes angry, but beyond everyone’s opinions, the authors of the saga have always sought to explain the events that unfolded before our eyes, failing to convince everyone. One thing is certain, the emotion is at the rendezvous of this conclusion and we took great pleasure in living it.

If Kento Kinoshita, the director of the game, announced a duration of about four hours for this new experience, on our side three and a half hours were enough for us to enjoy the end credits. This may not seem like much to some, but this duration makes this extension one of the longest in the franchise to date, knowing that ten hours are enough to complete the original game. First surprise, we direct Rose exclusively in third person view. It is therefore impossible to play this DLC in subjective view as we did for the original story of RE 7 and Village. Those who have played the remakes of Resident Evil 2 and 3 will not be out of place, and once again the RE Engine shows its ability to shine regardless of the chosen perspective. 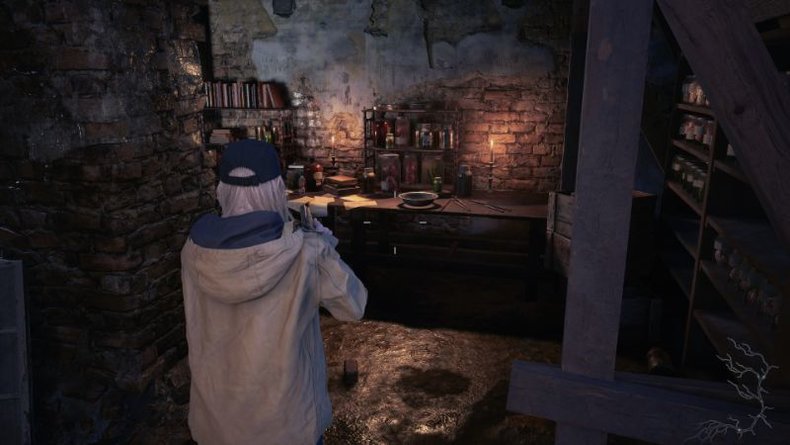 Another counterpoint to Village, Les ombres de Rose turns its back on the desire to open up the game to semi-open areas and fits into the continuity of the game design of the latest remakes. Thus, this new adventure is very scripted and offers a level design worthy of the old opuses of the franchise with a very directed progression, puzzles to solve and a profusion of “corridors” blocked by artificial obstacles or doors with locks still as always. wacky. On the other hand, it benefits from the modernization of the gameplay with a more ergonomic map, more generous ammunition, less rigid animations and here the use of powers to immobilize enemies and destroy Rose’s mold buds.

Finally, Les ombres de Rose seemed to us to be a mini best-of of what has pleased (or should please according to the developers) the fan community in recent years, between the favorite places and the amazing experiences offered by Village and the acclaimed contributions of the remakes of the first trilogy of the saga. However, the bestiary created from the molds, as in RE 7, is a disappointment. We have known in the saga much more striking and terrifying enemies.

For vision problems, we have the solution

Let’s finish our return to the Winters’ Expansion by slipping a few words on the rest of its content. Some, sometimes allergic to the subjective view, were also eagerly awaiting the arrival of the third person view for the original story of Resident Evil Village. It is clear that a very slight disappointment animates us regarding this addition. The adventure via this new perspective remains pleasant, whether for the discovery of the game or to relive it. However, we feel that the game’s level design, especially in more open spaces, can become problematic. Thus, it happened to us to have problems with the placement of the camera in certain places and unfortunately during the most tense moments. Collision issues with scenery that we hope will be eliminated with a future update.

Finally, the Mercenaries mode has not been forgotten. The latter, unlocked at the end of the main adventure, allows us to face hordes of enemies in waves in the emblematic areas of the game. A high score, linked to a final ranking, allows us to unlock the other places and higher difficulty levels. The Winters’ Expansion adds to this game mode three new playable characters (Chris Redfield playable entry, Heisenberg and Lady Dimitrescu to unlock) and two new locations: Bloody River and Bloody Village.

For achievement seekers, seven new challenges come with the DLC for an additional 190 points.