Today in the Hardware Kitchen, after focusing on several RTX 4090s and RTX 4080s, we are tackling the new high-end next-generation graphics card from AMD with the Radeon RX 7900 XTX. On this occasion, we have the honor of welcoming the very beautiful Sapphire RX 7900 XTX NITRO+ OC Vapor-X in the Hardware Kitchen. A custom card with a pretty nice design. Let’s see throughout this test the performance of this 7900 XTX from sapphire in terms of video games, applications, but also consumption, temperatures and of course latencies.

To start with the hard, let’s talk about the technical characteristics of this GPU from AMD, the NAVI 31 GPU has 6,144 shading units with 384 TMU, 192 ROP and above all 96 CU (Compute Units) and therefore 96 RT Cores. The L2 cache is 6 MB and 96 MB for the L3. For the GPU frequency, on the base model we are at 2500 MHz, on our custom version from Sapphire with this Nitro+ OC Vapor-X, the Boost frequency goes up to 2680 MHz, which is not bad at all , this represents an OC of +7%. On the game Clock side, we go from 2269 MHz to 2510 MHz, i.e. +11% factory OC. We are therefore on the new RDNA 3 architecture replacing RDNA 2 of the RX 6000. On this new architecture, we benefit from better engraving finesse and many various and varied improvements.

For the memory configuration, we have for the first time at AMD 24 GB GDDR6 running at a speed of 20 Gbps on a 384-bit bus. The bandwidth is therefore 960 GB/s. Finally, let’s specify the announced TDP of 355W for an MBA model, but our custom card has a TDP of 420W and the brand recommends an 800W power supply. The power supply is in 3*8-pins.

As a reminder, AMD announces that its Radeon RX 7900 XTX aims to compete with the NVIDIA GeForce RTX 4080. It will therefore be very interesting to see how our custom model will fare against our RTX 4080 Founders. We will see what it is later during our gaming tests.

Note that at present, high-end cards are very limited by processors in a 1080p definition (1920 x 1080 pixels). To take full advantage of it, we highly recommend at least a 4K UHD (3840 x 2160 pixel) display. Small novelty on this generation of graphics cards from AMD: the introduction of DisplayPort 2.1. This standard allows a bandwidth of 54 Gbps and is therefore capable of supporting 8K165 (8K at 165 Hz) or even 4K480 (4K at 480 Hz). Additionally, the DP1.2 also supports 12-bit color depth to display up to 68 billion colors. Keeping with the video theme, RDNA 3 also introduces the AI ​​(Artificial Intelligence) assisted Dual Media Engine. This is a system capable of encoding/decoding AV1 streams in 8K60 while decoding/encoding WITH or HEVC streams.

Although for the moment this new generation of graphics cards has been inaugurated with the RX 7900 XTX and 7900 XT, we expect to see in the coming months up to a total of 9 models making up the RX 7000 Series.

In terms of pricinglet us first recall that the map AMD Radeon RX 7900 XTX is referenced on the AMD shop at a price of 1127 euros. Regarding this custom model from sapphireit is referenced to 1350 euros at Top Purchase or for 10 euros more at LDLC. In short, a price lower than the RTX 4080 which can now sometimes be found at 1350 euros minimum (1400 euros for the Founders). This clarification is important since it is this card that aims to compete with the RX 7900 XTX.

In terms of packaging, the cardboard is based on a black theme with touches of blue on the bottom. AMD obliges, the important references are on a red background.

To talk about the bundle, we have a stand to hold the board upright, a cable to sync the ARGB lighting to the motherboard, a quick installation guide and finally a guide on how to use the cable and how the switch works BIOS. 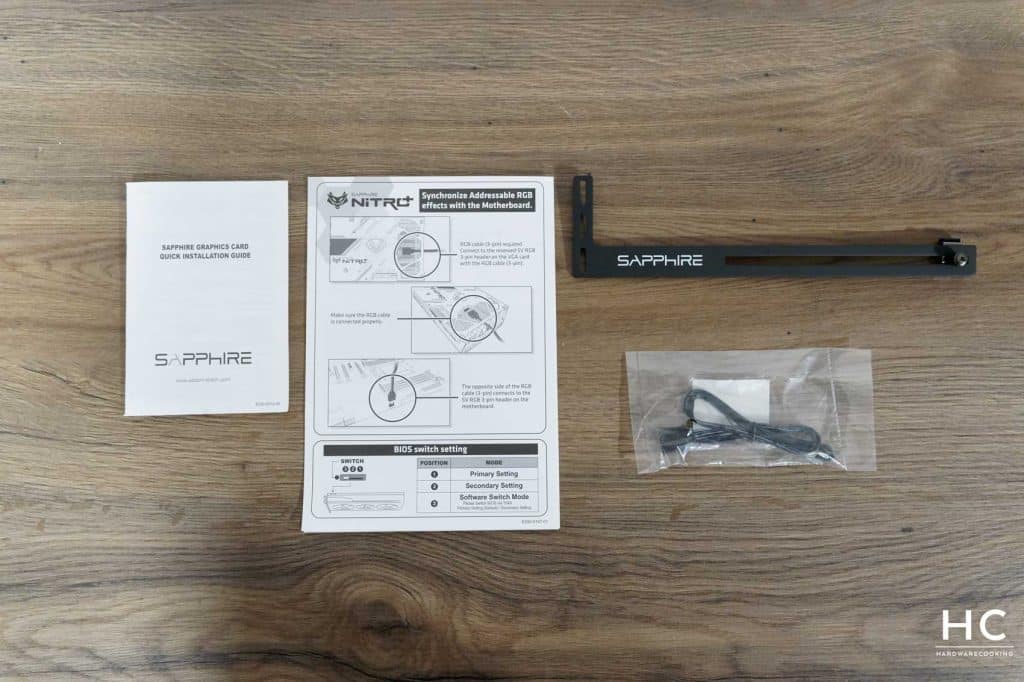 Visually, we are therefore on a custom design from Sapphire which is based on a three-fan cooling system. From the front, it’s quite sober and we can see that the blades have a particular design that we find very nice. In addition, this rather original design makes them 10% quieter compared to the previous generation. But this shape also allows it a double layer of downward air pressure which, together with the air pressure on the outer ring of the axial fan, results in up to 44% downward air pressure in more and up to 19% more airflow for quieter, cooler operation. Always compared to previous generations.

Moreover, the central fan rotates in the opposite direction to the other two. This is to reduce turbulence and therefore improve airflow. Moreover, in the event of a problem with a fan, a quick replacement system is possible. All you need to do is remove a single screw holding the fans in place. This also makes cleaning easier and in the event of an HS fan Sapphire will send a replacement fan. Still talking about the fans, they have a two-ball bearing giving them an 85% longer life than sleeve bearing systems.

We obviously find a backplate entirely in metal, also quite sober and gray in color.

For cooling, Sapphire uses a vapor chamber in contact with the surface of the main chip and the memory. Since the entire area transfers heat at the same rate, the Vapor-X module was designed to perform more efficiently than a copper heat sink in removing heat. As it gains heat, the heat source is pushed towards the vaporizing wicks to begin the heat dissipation process. Due to the extreme low pressure, the fluid and pure water is easily vaporized and transferred through the vacuum until it reaches the condensation wick which is adjacent to the cooled surface. From there it reverts to a liquid state in which the liquid is then absorbed into the transport wick by capillary action and returned to the vaporizing wick.

As the GPU temperature rises, the graphics card fans speed up accordingly. To further aid in cooling and heat dissipation, SAPPHIRE’s TriXX Software Support System Fan Control feature controls the speed of another system fan to automatically increase airflow at the same time. of the housing and expelled the hot air more quickly.

Regardless of the edge of the card, the design is very neat and you can see the care that has been taken with the various cooling components of the card.

In terms of connectivity, this card offers two HDMI 2.1a ports as well as two DisplayPort 2.1 ports. You can see the thickness of 3-slots, the rest of the bracket has an air vent to help evacuate hot air. 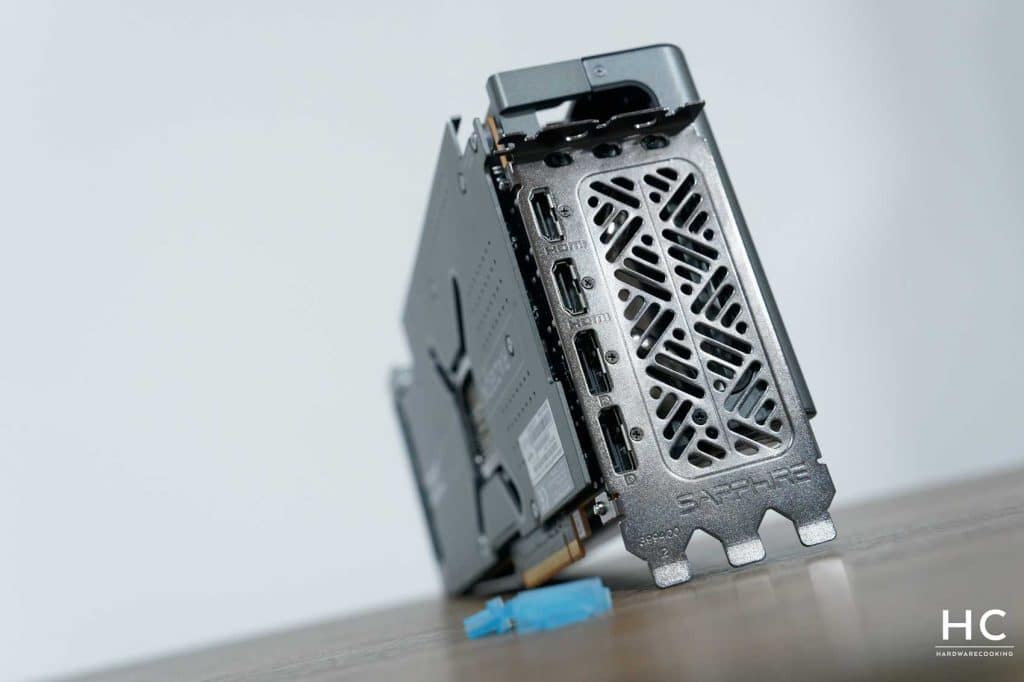 High-end requires, this graphics card has a physical three-position switch. We have in the first two positions the “Primary Settings” and the “Secondary Settings”. The last position will allow you to play with it via the software. 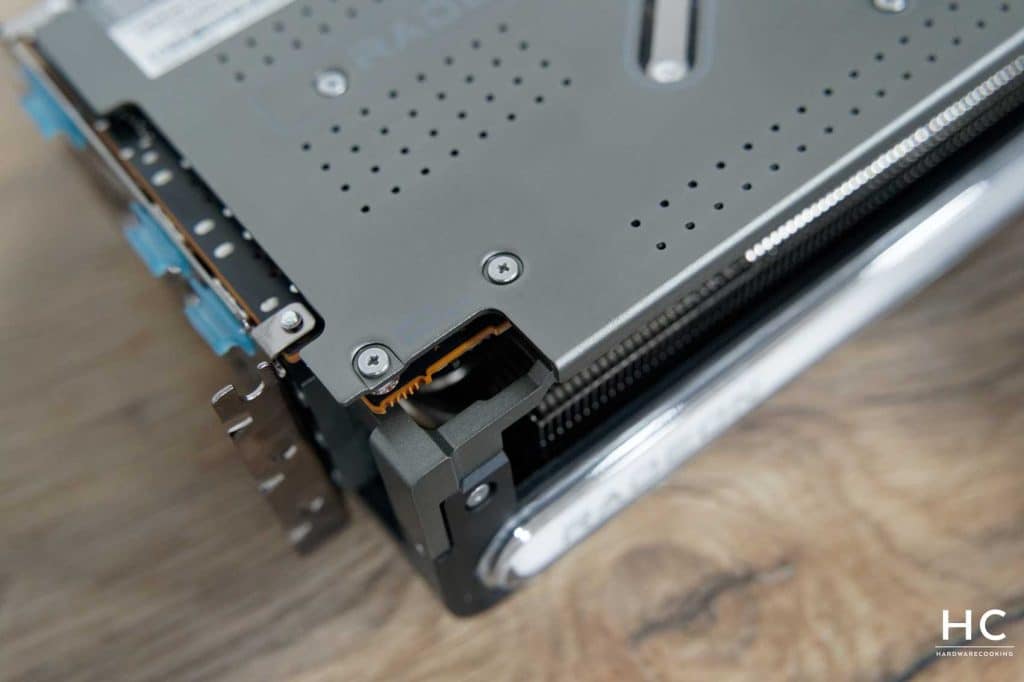 We therefore find ARGB lighting as already mentioned above. On the edge of the card we have a large backlit strip with the RADEON logo on the left and the Sapphire logo on the right. Note that we also find this ARGB bar on the other edge of the card at the PCIe connector. Finally, on the backplate, the Sapphire logo also has lighting. This lighting can therefore be synchronized with its motherboard by connecting the cable supplied as a bundle.

Let’s move on and take a closer look at the Ada Lovelace architecture.