It’s no secret that Samsung is working on the next high-end smartphone, which will be the Galaxy S23 Ultra. Its design seems definitive and we can see what it could look like thanks to visuals published on the web and of which here are all the details.

It seems that the next series of high-end smartphones Samsung Galaxy S23 Ultra before well since prying people reveal that the devices are in the process of passing their first conformity certifications. This implies that a launch is not very far away. If all goes well, the South Korean giant could make an announcement by early next year as the firm did for the Galaxy S22 series in January.

The Smartprix.com site in collaboration with the very well informed OnLeaks has just published a series of photo renderings of what could well be the next high-end Galaxy S23 Ultra smartphone. Its dimensions would be 163.4 x 78.1 mm for a thickness of 8.8 mm compared to the measurements of the current Galaxy S22 Ultra which are 163.3 x 77.9 mm for a thickness of 8.9 mm. The screen would have a 6.8-inch diagonal, like its predecessor, but with higher brightness, greater color accuracy and state-of-the-art HDR processing. The selfie camera seems integrated in the center, at the very top.
The buttons to turn on the mobile and manage the volume are available on the right profile when looking at the device from the front. We find the classic slots for the speakers, SIM card drawer and USB-C connector. The profiles of the smartphone seem slightly more angular than the previous ones, more rounded. Regarding the photo sensors, they use the same location as those installed on the back of the Galaxy S22 Ultra but with the two smaller sensors which are literally embedded in the shell of the mobile not exceeding whereas this is the case on the model of this year.

What technical characteristics are expected for the Galaxy S23 Ultra?

For its most high-end model, Samsung should use a Qualcomm Snapdragon 8 Gen 2 processor with 12 GB of RAM and have a 200 megapixel photo sensor on the back. It would be compatible with the S Pen, the stylus developed by Samsung. It is said that the mobile could support the load at 25 watts for the models sold in China, but that another version would be able to accept higher power and would be available in other countries. There are still several weeks before the new Galaxy S23 series is officially presented and it is possible that by then things will become clearer about the Ultra version but also the others. 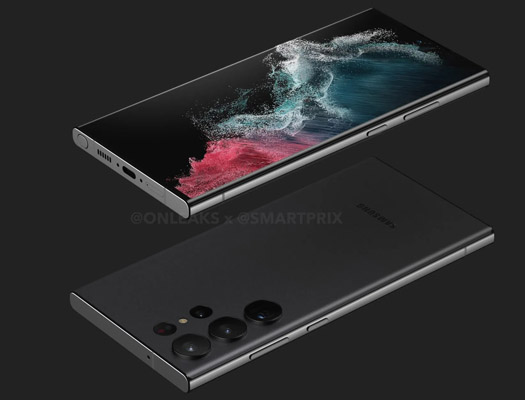