More than seven years after its initial release, The Witcher 3: Wild Hunt returns in a new edition. The CD Projekt game has indeed offered a next-gen update, bringing various new features to PC, Xbox Series X | S and PS5, such as ray tracing and graphic improvements. While the PC version has already shown its weaknesses with erratic performance, today it is the Xbox Series X and PS5 versions that have passed into the hands of Digital Foundry.

Two graphics modes are available on Xbox Series X and PS5. The first is a performance mode that aims for 60 FPS, while the second is a 30 FPS ray tracing mode. The contribution of ray tracing is indisputable in the game. We can directly see the difference in the management of light and shadows. On the other hand, ray-traced reflections are only available on PC.

In RT mode, the game runs in dynamic 1440p on Xbox Series X and PS5 thanks to FSR 2.1, while performance mode runs in dynamic 4K at 60 FPS. Digital Foundry says Microsoft’s console generally runs at a slightly higher dynamic resolution than the PS5 version.

On the other hand, the experts note that the PS5 version offers a much better display distance than the Xbox Series X version; vegetation and shadows are particularly affected. 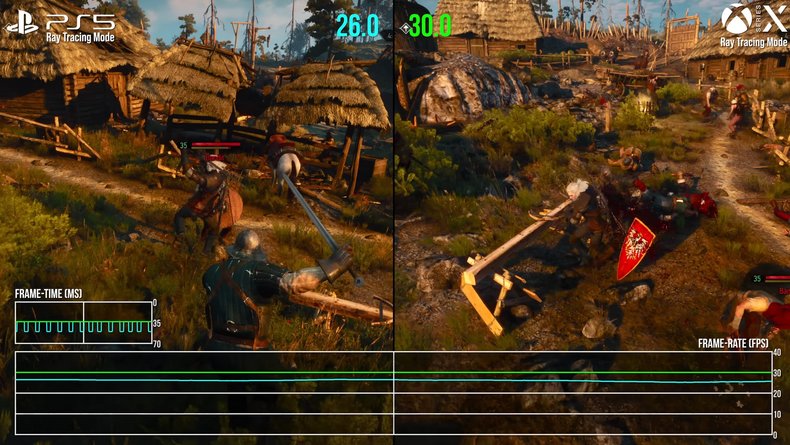 As for framerate, the game generally runs better on Sony’s console in its performance mode in dense areas like the city of Novigrad. The Xbox Series X, on the other hand, is to its advantage in certain combat phases and outside cities. Digital Foundry specifies that in general, the two machines offer satisfactory performance.

In RT mode, the Sony console struggles to keep the 30 FPS compared to the Microsoft console. It is also pointed out that the input lag is much higher in ray tracing mode than in performance mode, which greatly impacts the feel and responsiveness of the game on both machines.

It’s a safe bet that several updates will be able to correct these few technical glitches on both consoles. In the meantime, remember that this update for The Witcher 3 is available for free and can be downloaded now. You will find the details of the novelties at this address.