Warlander is based on team fortress conquest mechanics on battlefields that can accommodate up to a hundred players. The game is announced in open beta from September 12.

Just announced by its developer Toylogic, with the support of its publisher PLAION, Warlander takes the form of a vast arena game between up to a hundred players who compete in teams to take control of the enemy fortress and destroy its heart.

Concretely, Warlander players start by choosing character archetypes (warrior, priest or magician), which we can customize the appearance but also the equipment, abilities and skills, according to the levels accumulated – the characters progress by earning “titles of glory”. According to the developer, players thus create “decks” of characters that can be deployed on the battlefield: characters without Titles can be deployed at any time, characters with Titles of Glory can only be engaged in combat when certain levels of confrontations are reached. During a fight, players can also deploy siege weapons or cast devastating spells to take control of the battlefield. 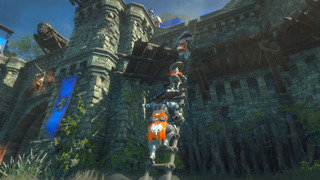 The players are anyway gathered in teams and will have to play together to overcome the opposing fortress, while defending their own. At launch, Warlander will feature two skirmish formats: one where two teams of up to 40 players compete against each other, the other where five teams and up to 100 players are against each other. In both cases, players will be able to join their team alone or in a preformed squad with their loved ones.

Warlander will be distributed on PC (pending console versions), and must adopt a free-to-play economic model (the developer obviously promises the absence of pay-to-win content). And while waiting for a commercial launch, Warlander must be unveiled in an open beta from September 12, distributed on Steam – in principle at this address but obviously still not functional for the moment.