Phil Spencer seems to be a player. Anyone who has already hidden objects and consoles on his shelves seems to have teased a new object. But the one that looked very much like the Chromecast made in Microsoft does not seem to be released for several years.

A device to stream Xbox Game Pass games on your screen?

[Mise à Jour de 27/10/2022] After the response from the official Xbox account which spoke of a prototype, Phil Spencer recently raised the subject by giving some details on this famous device. Words transcribed by journalist Tom Warren.

Keystone [nom de code du projet, ndlr] was something we were incubating internally. In late spring, we pivoted to work with Samsung instead. I still have the prototype… are we going to make a streaming device at some point? I think we will, but not for years.

An Xbox dedicated to the Cloud? A Chromecast to broadcast Xbox Game Pass games? This is not the first time that we have mentioned the subject on Xboxygen, and the boss of Xbox has probably just teased an upcoming announcement.

It’s on Twitter that Phil Spencer has just posted a photo of his shelf evoking the Vault Boy for the anniversary of the Fallout franchise. But upon closer inspection, an as-yet-unknown object has been placed at the very top of the shelf, prominent enough to be seen.

Nobody knows what it is right now, but when you see the size of the Xbox controller next to it, you can imagine it being a Chromecast-like device to plug into the TV for play Xbox Game Pass games. This one could be between 10cm and 13cm long according to our estimates, with a white design in the style of the Xbox Series S.

For the moment, Microsoft has not communicated on this device, but we officially know that a Chromecast type device is in preparation at Xbox since summer 2021.

Xbox designs its own streaming devices for the cloud, so gamers can enjoy it from any screen, without the need for a console.

At the time, we were talking about an Xbox TV Stick, and unless it’s a completely different device here, there’s every reason to believe we’ll learn more about it before the end of the year. 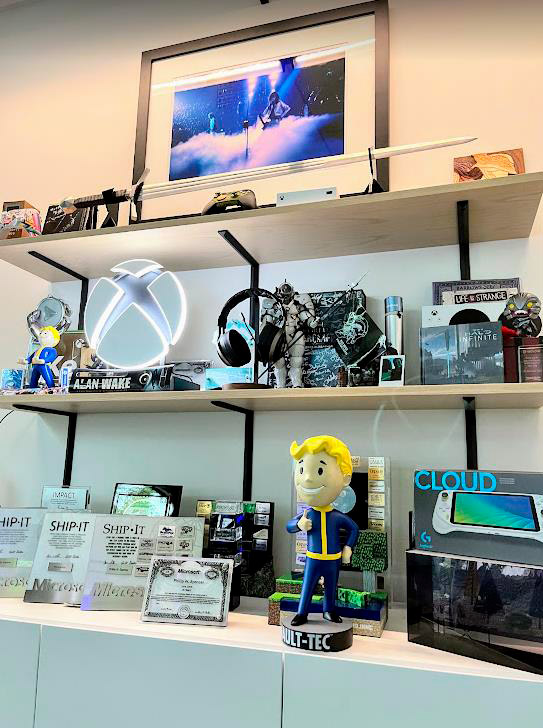